During celebrations, the course of which may differ depending on the region, Saint Nicholas rewards the good behavior of children by giving them gifts or sweets, often assisted by a threatening-looking companion who is responsible for punishing those who do not. not been wise.

Saint Nicholas, riding his donkey, passes by and knocks in his turn on the butcher's door. The man, not daring to reject a bishop, invites him to dinner. His guest asking him for something salted, the butcher understands that he has been discovered and, trapped, confesses everything. The holy man then extends three fingers above the barrel of salted snacks, thus reconstituting and resuscitating the three children.

Saint Nicholas then chains the butcher to his donkey and keeps him near him to punish him. This becomes Father Fouettard, a bad being, whose role is to reprimand disobedient children and dunces, with his violent and irascible character. Always dressed in black, hidden under a hood and a thick black beard, he embodies the entire opposite of Saint Nicholas, in short, who sports a beautiful white beard, colorful bishop's clothes, mauve and white, with a butt, originally golden, then red and white, which brings him closer to the current Santa Claus Saint Nikolaus became Santa Klaus, and still gives the image of a benevolent person.

In some regions he is accompanied by Father Fouettard (Zwarte Piet - Krampus - Père Fouettard or “Pierre le Noir” verbatim - in Dutch. Hans trapp in Alsatian, “Houseker” in Luxembourgish) who, dressed in a large black coat with a large hood and big boots, sometimes carries a whip and a bag. He does not have the good role since he threatens to distribute cudgels to children who have not been good or to take them in his bag and who sometimes gives charcoal, potatoes and onions or quiche. The Père Fouettard is also often represented with horns and a tail.

Today Christians celebrate Saint Nicholas' Day. The good children will be rewarded and the bad ones will be beaten by the Krampus or Fouettard fathers. #mythology #mythe #legend #calendar #6December #krampus #saintnicolas #saintnicholas 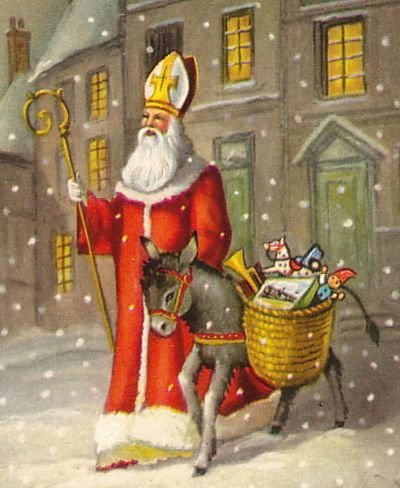