Saint Agatha of Catania or Agatha of Sicily is a Christian saint, virgin and martyr, who died in 251. She is commemorated on the 5 February.

Known by a hagiographic account of the 5th century from late traditions, his legendary life was taken up by Jacques de Voragine in La Legend golden.

Born in the 3rd century in Catania in Sicily, in a noble family, Agatha was of great beauty and honored God with fervor and had thus consecrated her virginity to him. Quintian, proconsul of Sicily but a man of low origin, wanted above all to marry her, thinking that he could thus gain respect but also enjoy the beauty and fortune of such a wife.

Agathe having refused his advances, Quintien sent her to a brothel run by a certain Aphrodisia whom he instructed to make her accept this marriage and to renounce her God. The landlady having failed, Quintien had Agathe thrown into prison and tortured her. Among the tortures she endured, her breasts were torn out with pliers, but the Apostle Peter appeared to her in prison and healed her of her wounds. Other tortures ended up killing him and his death was accompanied by an earthquake that shook the whole city.

A year after his death, Mount Etna erupted, pouring a flow of lava towards Catania. According to legend, the inhabitants seized the veil that covered Agatha's tomb and placed it in front of the fire, which immediately stopped, thus sparing the city.

Since then, his name has been invoked to protect against earthquakes, volcanic eruptions or fires.

Agatha appears after Felicity and Perpetua, and before Lucy, Agnès, Cécile and Anastasie among the seven saints mentioned in the canon of the Roman Catholic Mass.

She is one of the three great saints of Sicily, she in Catania, Lucia in Syracuse and Rosalie in Palermo.

Saint Agatha is the patron saint of nannies, jewelers, bell founders, of the cities of Catania and Palermo, as well as of the island of Malta. His relics, which would have been transferred to Constantinople in 1050, now rest since 1126 in the chapel dedicated to him in the cathedral of Catania which is dedicated to him.

A popular breast-shaped pastry is made on the feast day of the saint, the "Minne di Sant'Agata" or "Minuzzo", which is served in pairs in Sicily in the city of Catania. These are small dough domes filled with fresh cheese, candied fruit and pistachio. Covered with white icing and topped with a candied cherry, they symbolize the bosom of martyrdom.

In France, it is by the brioche that we will designate the duck breast of Agathe of Sicily, through the cake of Saint-Genix, or cake of Labully, which was invented in 1880 by the pastry chef Pierre Labully in the village of Saint-Genix-sur-Guiers in Savoy. The appearance in this region of the cult of Saint Agatha as well as the tradition of buns in the shape of cut breasts dates back to the annexation of Sicily to the Duchy of Savoy in 1713.

The feast of Saint Agatha, which takes place every year from February 3 to 5, is the most important religious festival in Catania. The bust of the saint which houses her relics is installed on a monumental reliquary chariot, the "fercolo", which is carried in procession through the city. Even the mafiosos of Catania force the reliquary to stop under the balcony of their house.

Today, Catholics commemorate Saint Agatha. Martyr of Sicily, she was tortured because of her beauty and her devotion to God. Her breasts were torn off and when she died disasters befell Sicily. Pastries in the shape of breasts recall her suffering. #mythology #myth #legend #calendar #5February #sainteagathe #agathe #sicily #catania 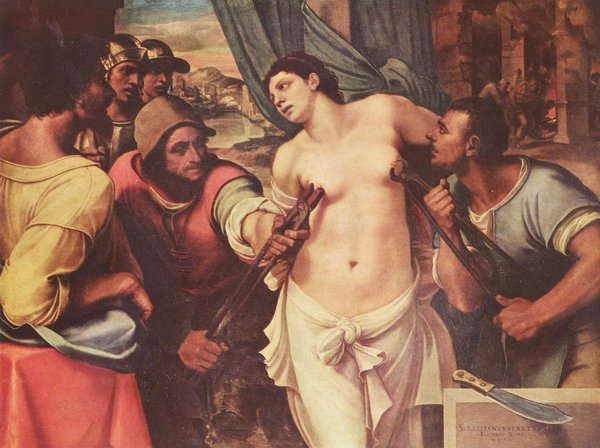