Völund had two brothers, Egil and Slagfidur (or Slagfin). In one version of the myth, the three brothers discovered valkyries, swan princesses, bathing. To do this, the three valkyries, Œlrun, Alvit and Svanhvit, had taken off their swan clothes.

In another version, Völund married the swan-woman Hervör and had a son with her, Heime. Hervör left him a little later. In both versions, he found himself alone but kept a ring from his marriage. In the first myth, he forged seven hundred copies of this ring.

Subsequently, he was captured in his sleep by King Nidud of Sweden. To prevent him from escaping, Nidud had the tendons of his leg cut off and imprisoned him on the island of Saeverstod. He forced him to forge coins for himself and his family. Völund's ring was given to his daughter, Bodvild. Nidud took his sword.

In German legend it is said that he forged a sword for his son Heime, which was wielded by Miming and then by Hod. He is also said to be the Prince of the Dark Alves, of Svartalfheim.

It is also associated with the Wieland Forge, a burial tomb in the County of Oxford. This megalithic monument was so named by the Saxons, but it largely predates them. From this assimilation comes the superstition that a horse left overnight with a small piece of silver (groats) would be found the next day completely ironed, the part having disappeared…

He is the Nordic ideal of an engineer.

The first literary testimony concerning Wieland the blacksmith comes from England. It is an acephalous text copied in the Book d’Exeter compiled around 950-1000. Due to the language used, scholars believe the poem was written between the VIe and the VIIe century. This anonymous text has been given the name of Deor's Complaint Where Complaint by Deor. It contains elements absent from the Norse texts. The early diffusion of the legend of Wieland in England is attested by the casket of Auzon, probably made in Northumbria in VIIe century, which shows an episode from the legend of the blacksmith.

The legend seems to have spread at the time of the great invasions, notably with the Franks, the philological analysis showing an important Westic substrate. We thus note the importance of the diffusion of the name of Wieland in Romanized forms from the Carolingian period. 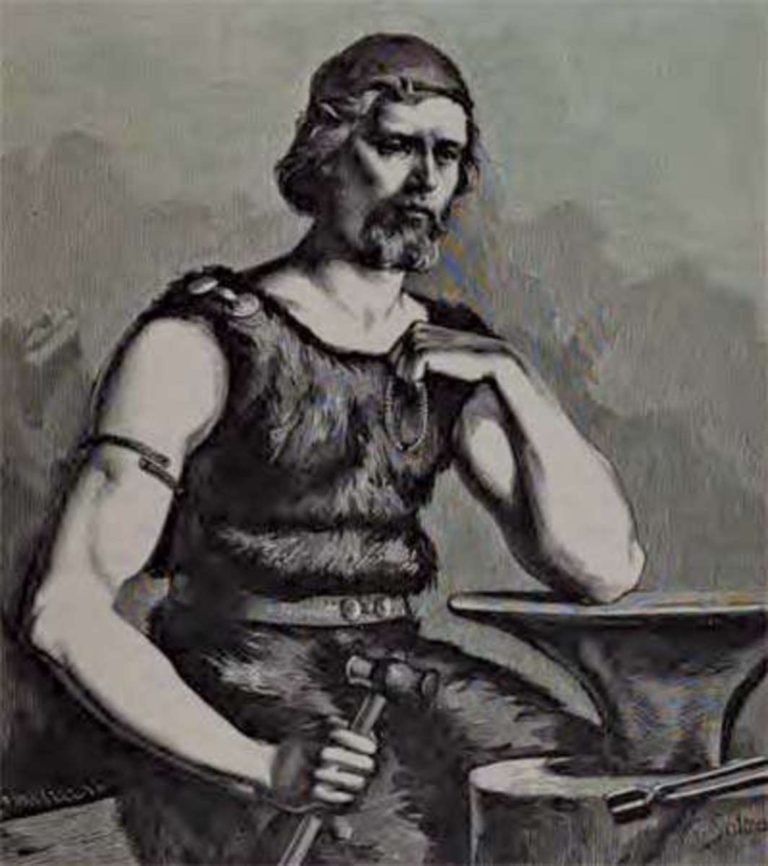