During the Lantern Festival, children go out at night with paper lanterns and solve lantern puzzles (Traditional Chinese: 猜燈謎; Simplified Chinese: 猜灯谜). In ancient times, lanterns were quite simple, and only the emperor and nobles had large ornate ones. In modern times, lanterns have been adorned with many intricate designs.

For example, lanterns are now often made in the shape of animals. Lanterns can symbolize people letting go of their past and gaining new ones, which they will let go next year. Lanterns are almost always red to symbolize good fortune.

There are several beliefs about the origin of the Lantern Festival. However, its roots go back more than 2,000 years and are generally linked to the reign of Emperor Ming of the Han Dynasty when Buddhism was developing in China. Emperor Ming, an advocate of Buddhism, noticed Buddhist monks lighting lanterns in temples on the fifteenth day of the first lunar month. Accordingly, he ordered all houses, temples, and the imperial palace to light lanterns that evening. From there it became a folk custom.

Another likely origin is the celebration of "the waning darkness of winter" and the community's ability to "move at night with artificial light", namely lanterns. During the Han Dynasty, the festival was linked to Ti Yin, the pole star deity.

There is a legend who says it was a time to worship Taiyi, the Sky God in ancient times. The belief was that Taiyi controlled the fate of the human world. He had sixteen dragons at his disposal and he decided when to inflict drought, storms, famine or plague on human beings. Beginning with Qin Shi Huang, the first emperor of China, all emperors have ordered splendid ceremonies every year. The emperor asked Taiyi to bring a favorable climate and good health to him and his people.

Emperor Wu of the Han Dynasty paid special attention to this event. In 104 BCE he proclaimed it to be one of the most important celebrations and the ceremony would last all night.

Another legend associates the Lantern Festival with Taoism. Tianguan is the Taoist deity responsible for good fortune. His birthday falls on the fifteenth day of the first lunar month. It is said that Tianguan loves all types of entertainment, so followers prepare various types of activities in which they pray for good fortune.

Another legend associates the Lantern Festival with an ancient warrior named Lan Moon, who led a rebellion against the tyrannical king in ancient China. He was killed during the capture of the city, and the successful rebels commemorated the festival in his name.

Another common legend dealing with the origins of the Lantern Festival speaks of a beautiful crane that flew to earth from the sky. After landing on land, he was chased and killed by villagers. This irritated the Jade Emperor in Heaven because the crane was his favorite. Thus, he planned a firestorm to destroy the village on the fifteenth lunar day.

The Jade Emperor's daughter warned the townspeople of her father's plan to destroy their village. The village was in turmoil as no one knew how to escape its impending destruction. However, a wise man from another village suggested that every family hang red lanterns around their houses, light bonfires in the streets, and detonate firecrackers on the fourteenth, fifteenth, and sixteenth lunar days. This would make the village look like it was on fire for the Jade Emperor.

On the fifteenth lunar day, troops sent from heaven whose mission was to destroy the village saw that the village was already on fire and returned to heaven to report to the Jade Emperor. Satisfied, the Jade Emperor decided not to burn down the village. From this day on, people celebrate the anniversary on the fifteenth lunar day every year by carrying lanterns through the streets and detonating firecrackers and fireworks.

Another legend about the origins of the Lantern Festival involves a maid named Yuan-Xiao. In the Han Dynasty, Dongfang Shuo was a favorite adviser to the emperor. One winter day, he went to the garden and heard a little girl crying and about to jump into a well to kill herself. Shuo stopped her and asked why. She said that she was Yuan-Xiao, a maid in the emperor's palace, and she had never had the opportunity to see her family since she started working there. If she couldn't have the chance to show her filial piety in this life, she would rather die.

Shuo promised to find a way to reunite her with her family. Shuo left the palace and set up a divination booth on the street. Due to his reputation, many people asked to know their fortunes, but everyone received the same prediction – a calamitous fire on the fifteenth lunar day. The rumor spread quickly.

Everyone was worried about the future so they asked Dongfang Shuo for help. Dongfang Shuo said that on the thirteenth lunar day, the god of fire would send a fairy in red on a black horse to burn down the city. When people saw the fairy, they had to ask for her mercy. That day, Yuan-Xiao pretended to be the Red Fairy. When people asked for her help, she said she had a copy of a decree from the fire god that needed to be taken to the emperor.

After he left, people went to the palace to show the emperor the decree which stated that the capital would burn on the 15th. When the emperor asked Dongfang Shuo for advice, the latter told him that the fire god liked to eat tangyuan (sweet dumplings). Yuan-Xiao should cook tangyuan on the fifteenth lunar day, and the emperor should order each house to cook tangyuan to worship the fire god at the same time.

In addition, each house in the city should hang a red lantern and detonate firecrackers. Finally, everyone in the palace and people outside the city must carry their lanterns out into the street to watch the lantern decorations and fireworks. The Jade Emperor would be tricked and everyone would avoid the disastrous fire.

The Emperor happily followed the plan. Lanterns were everywhere in the capital on the night of the fifteenth lunar day and people were walking on the street and there were loud firecrackers. It was as if the whole city was on fire. Yuan-Xiao's parents entered the palace to look at the lantern decorations and found their daughter. The emperor decreed that people should do the same thing every year. Since Yuan-Xiao cooked the best tangyuan, people called the day Yuan-Xiao festival.

Today the Chinese celebrate the Lantern Festival. Having many legends religious, cultural and folkloric, this festival marks the end of the fortnight of the Chinese new year. #mythology #myth #legend #calendar #lantern festival #china 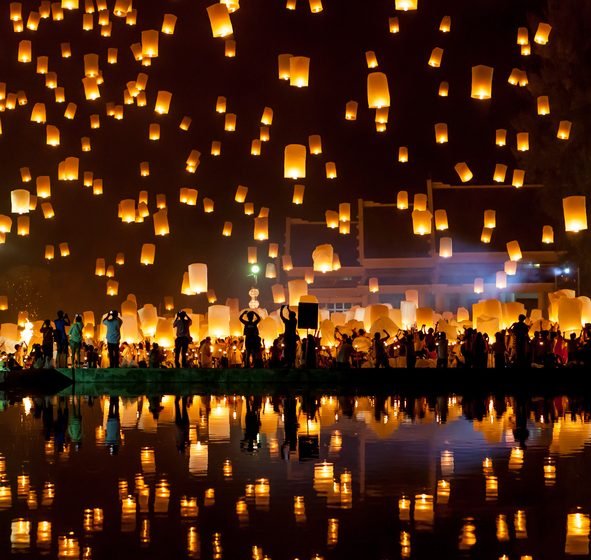