Lohri and Maghi are popular winter folk festivals celebrated mainly in the Indian subcontinent. The meaning and the legends of the Lohri festival are numerous and connect the festival to the Punjab region. Many believe that the festival marks the passing of the winter solstice. Lohri marks the end of winter and is a traditional welcome of longer days and the sun's journey to the northern hemisphere by Hindus and Sikhs in the northern region of the Indian subcontinent. It is observed the night before Makar Sankranti, also known as Maghi, and according to the solar part of the Vikrami lunisolar calendar and generally falls on around the same date each year (13 January).

Lohri and Maghi, the end of winter

The ancient significance of the festival is that it is a celebration of the winter harvest season and is related to the Punjab region.

Popular folklore links Lohri to the tale of Dulla Bhatti. The central theme of many Lohri songs is the legend of Dulla Bhatti who lived in Punjab during the reign of Mughal Emperor Akbar. He was considered a hero in Punjab, for saving Hindu girls from being forcibly taken away to be sold in the Middle Eastern slave market. Among those he rescued were two daughters Sundri and Mundri, who gradually became a theme of Punjabi folklore.

As part of Lohri celebrations, children go around houses singing traditional Lohri folk songs. After the song is finished, the adult in the household is supposed to donate snacks and money to the youth singing troupe. Lohri also marks the start of the harvest season and sunny days.

The festival is celebrated by lighting bonfires, eating festive food, dancing and collecting gifts. In homes that have recently had a wedding or childbirth, Lohri celebrations will reach a higher level of excitement. Most North Indians usually hold private Lohri celebrations in their homes. Lohri rituals are performed, accompanied by special Lohri songs.

Singing and dancing are an integral part of the celebrations. People wear their brightest clothes and come to dance bhangra and gidda to the rhythm of the dhol. Punjabi songs are sung and everyone rejoices. Sarson da saag and makki di roti are usually served as the main course at a Lohri dinner. Lohri is a great opportunity which is of great importance to farmers. However, people residing in urban areas also celebrate Lohri as this festival provides an opportunity to interact with family and friends.

For Sikhs, it is a community gathering to commemorate the martyrdom of forty Sikhs (Chalis Mukte) who once deserted the tenth and last human guru of Sikhism, Guru Gobind Singh at Anandpur Sahib, but later joined the guru and died fighting the army of the Mughal Empire. ruled by Wazir Khan in 1705. Sikhs make a pilgrimage to the site of the war and bathe in the sacred water reservoirs of Muktsar.

Today and tomorrow, Indians celebrate Lohri and Maghi. The children go around the houses singing in order to receive sweets or money from the household. Lohri marks the return of spring. #mythology #myth #legend #13January #14January #calendar #lohri #maghi 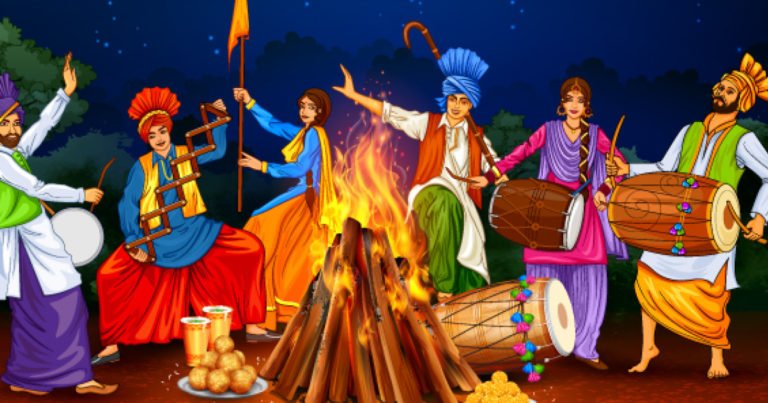