The original tale has mixed with elements of folk tales and Celtic stories, and so there are a number of variations on the tale. Dwynwen is said to have been the daughter of King Brychan Brycheiniog, who lived in the 5th century, making her the half-sister of Saint Ninnoc. His mother may have been Rigrawst. Dwynwen lived in Anglesey.

In the story told of her, either a young man named Maelon Dafodrill falls in love, but she rejects his advances; or she is unable to marry him because her father forbade the marriage and had already promised her to someone else. Distraught over her love for Maelon, Dwynwen prayed that she would not fall in love with him again. An angel provides him with a potion; Maelon turns to ice.

God then grants him three requests: that Maelon be freed; that, through her, God watches over all true lovers; and stay single. As a token of thanks, she then retired to the solitude of Ynys Llanddwyn off the west coast of Anglesey to become a hermit until her death, around 460 AD; although it was written in some texts that she fled there because of her fear of Maelgwn Gwynedd.

Dwynwen is said to have studied the healing properties of local herbs and was thus able to cure many ailments of people who sought her all over Wales.

Dwynwen retired to a small tidal island off the southwest coast of Anglesey. There she built a church; which became known as Llanddwyn, ("Church of Dwynwen"). His remains can still be seen on Ynys Llanddwyn. There was also Dwynwen's Well, where a sacred fish would swim, whose movements predict the future fortunes and relationships of various couples.

St Dwynwen's Church on Ynys Llanddwyn became an important shrine in the Middle Ages. The sacred well became a place of pilgrimage, where the movement of fish in its waters was believed to indicate the fate of lovers. 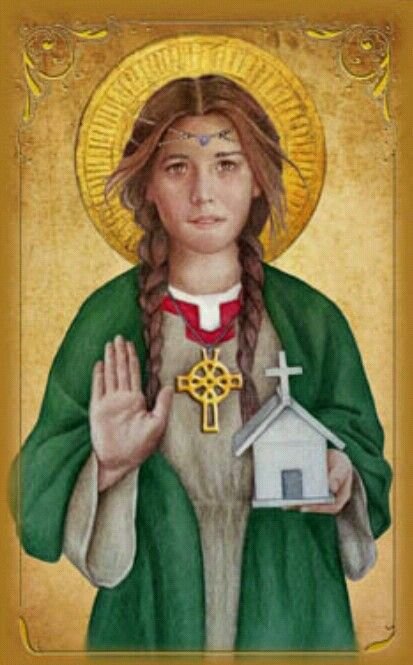