The Three Hierarchs of Eastern Christianity refers to Basil the Great (also known as Basil of Caesarea), Gregory the Theologian (also known as Gregory of Nazianzus), and John Chrysostom. They were very influential bishops in the early church who played a central role in shaping Christian theology.

In Eastern Christianity they are also known as the Three Great Ecumenical Hierarchs and Teachers, while in Roman Catholicism all three are honored as Doctors of the Church.

The Three Hierarchs, the first doctors of the Church

Disputes raged in the 11th century in Constantinople over which of the three hierarchs was the greatest. Some have argued that Basil was superior to the other two because of his explanations of Christian faith and monastic example. Supporters of John Chrysostom countered that the archbishop of Constantinople “with a golden mouth” (Greek : Χρυσόστομος) was unequaled both in his eloquence and in his ability to bring sinners to repentance.

A third group insisted that Basil's close friend Gregory the Theologian was favored over others because of the majesty, purity and depth of his homilies and his defense of the faith against the Arian heresy.

All three have separate feast days in January : Basil on January 1, Gregory on January 25 and Chrysostom on January 27. The Eastern Churches teach that the three hierarchs appeared together in a vision to Saint John Mauropous, bishop of Euchaïta, in the year 1084, and said that they were equal before God: "There are no divisions among us, and no opposition to each other. As a result, a January 30 feast commemorating the three in common was instituted around 1100 under the Byzantine Emperor Alexios I Komnenos.

Today, Eastern Christians celebrate the three hierarchs. Basil of Caesarea, Gregory of Nazianzus and John Chrysostom are among the first bishops of the Church. They contributed to the rise of Christianity in its beginnings. #mythology #myth #legend #calendar #January 30 #basile #gregoire #jean 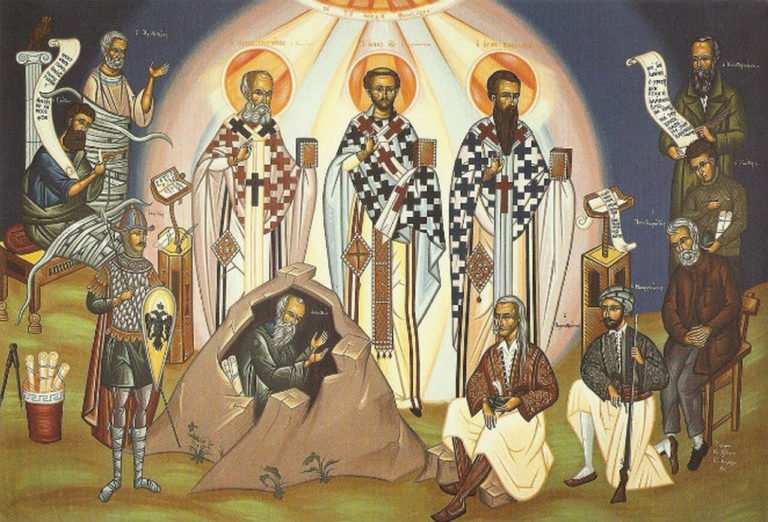