In the Yoruba religion, annual ceremonies honoring the dead serve to ensure their ancestors a place among the living. They believe that the ancestors have the responsibility to compel the living to uphold the ethical standards of past generations in their clan, town, or family. The Egungun are celebrated in festivals, known as Odun Egungun, and in family rituals through the custom of the mask.

In family situations, a family elder known formally or informally as " Alagba presides over the ancestral rites. He may or may not be initiated into the local Egungun society. In matters that concern entire communities, Egungun priests and initiates trained in ancestral communication, ancestral elevation, and funerary rites are responsible for invoking and bringing out ancestors.

They wear elaborate mask costumes. Through drumming and dancing, performers in Egungun attire are believed to become possessed by the spirits of ancestors, manifesting as a single entity. The Egungun spiritually cleanses the community; through the dramatic acting and mimicry of the robed priests, they demonstrate both ethical and amoral behavior that has occurred since their last visit.

In this way, they expose the strengths and weaknesses of the community to encourage more dignified behavior in their descendants. When this performance is over, performers dressed as Egungun give messages, warnings and blessings to the assembled spectators.

Today the Yoruba begin the festival of Odun Egungun. Egungun mask dance clothes are worn for ancestor worship. A dancer wears several layers, being able to change costumes during the performance. The costumes have particular meanings, depending on the peoples and villages. #mythology #myth #legend #calendar #June 20 #egungun #yoruba 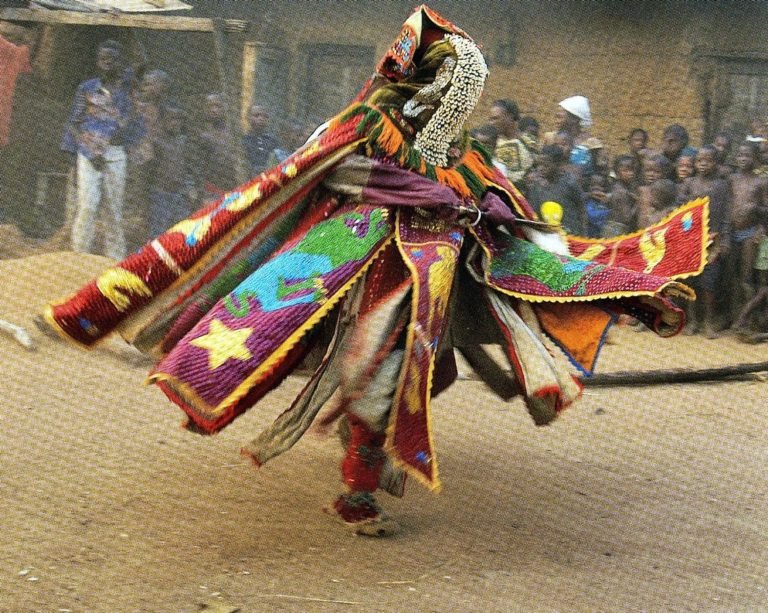